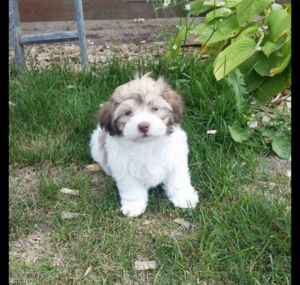 Well, I finally did it, I am now the owner of my very first fur baby as an adult.  I have been thinking about getting a dog for about a year and a half now, but it just never seemed to work out.  I have the perfect job to be a pet owner, as I work from home the majority of the time.  And I have a house with a small yard.  However, it just never seemed to work out.  I tried the adoption route and was never chosen by the pet rescue agency, probably because I don’t have a fence around my yard.  Who know’s maybe they just didn’t like me.  I answered several ads in Ontario and across the border for small dogs in the breed I was interested in and no one answered my emails or returned my calls.  I choose to believe it was because I hadn’t yet found the perfect dog for me.

I was attacked by a large dog when I was a child, so I am not fond of large dogs – at all.  I also have allergies so I need a dog that is hypo-allergenic, and I do not like highly active/hyper dogs that are destructive by nature.  So it took me a while to find out that there are a couple of breeds of dogs that would suit me and my lifestyle.  One is a Havernese and one is a Bichon Frise.  Once I had made this decision, now I just had to find one that I fell in love with.  This happened on August 4th, 2017.

I was having dinner with some friends who are Bichon Frise owners and they said, “let’s just look and see if we can find a puppy for you”.  We spent some time on-line and I finally found one not too far away and in my price range.  We answered the ad, as the owner had posted a cell number to text and she got right back to me.  She had 2 bables, one black and white male and one white female. I told her I was interested in the white female. She said she had someone coming to see them in the morning who might want both of them, but if not she would let me know.  In the morning, she texted and said both her puppies were gone, but her mom had a litter of three from the same sire.  She sent me a picture of Deacon and his brother and sister, who were both black and white and once I saw him, I knew he was meant for me.

My friends and I drove to Cambridge the next day to meet him and he came out of his crate, looked up at me and walked right over to me.  I picked him up and he snuggled right into my neck. I looked him in the eyes and asked him “Do you want to come home with me?”  He licked my nose and that was it.  He was mine.  Twelve days later I went to pick up my little fur baby (Dad – Bichon Frise and Mom – Bichon Frise and Shih tzu) and named him Deacon.  He turned 8 weeks old this past Sunday and he is perfect. He has lived with me now for one week.

He is going to require some training, as he fell asleep on the job the other night, but that’s ok.  I think he will work out just fine. He is definitely a keeper! 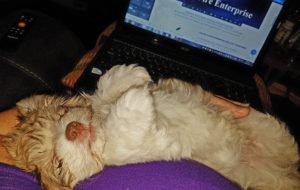